Tonight I was looking through some pictures, and as is often the case when I see pictures of my much healthier, slimmer, fitter self, I once again became totally motivated to get back on the weight-loss wagon.

The picture that inspired my motivation tonight – taken two years ago on our honeymoon.

Admittedly, I’ve been subsisting on a diet of hotdogs and nacho dip while home alone this week and I know that’s the first thing that’s got to stop.  My weight loss/gain has been a journey and one thing I’ve learned along the way is that it’s true what they say about weight loss being “20% exercise, and 80% nutrition”.

So I know a major overhaul to my diet is in order again.  I think back to all the changes I made before and how, gradually, over the last few years I’ve reintroduced foods that I had basically written off.  I also remember how surprised I had been when I had gotten to the point that my metabolism was trained to work so hard that I could indulge in treats and not gain back a single pound.  Then again, my concept of “treats” back then was a lot different too – it was more of a “once in awhile” mentality as opposed to the “every afternoon and most evenings” mentality that it is now.

One of the things I attribute my past success most to is the Weight Watchers program.  Weight Watchers taught me almost everything I know about eating better, exercising, and incorporating healthy habits into my daily life.  I was so naïve about many things the first time I joined and now, after being out of the program for a substantial amount of time, I am starting to think that maybe I need a good refresher.  Maybe it’s time for me to join Weight Watchers again.  Maybe it’s time to start new, get a fresh perspective, and start re-building those habits that I had worked so hard for the first time.

One of those habits that the program taught me and that I know absolutely and positively works is keeping a food journal.  The problem with me and food journals is that I tend to write down everything I eat as long as it’s healthy and the right kinds of foods.  As soon as I fall off track and start over-eating or indulging in too much junk food, I tend to not track.  So this time, I am putting it out there – starting tomorrow morning, I am going to track everything I eat and drink.  I will stay accountable … and maybe even share my food journals on here?  Hmmm….

I love how toned and healthy my body is here.

The other sad part about my weight gain, is that I had reached a spot where I was actually becoming physically fit and now I have lost all the benefits of that hard work.  It’s a hard pill to swallow but I have to accept it for what it is.  A few years ago I could run 10km, now I can barely walk half of that without feeling tired and feeling aches and pains in my legs and hips.  It’s a sad reality, but one that can be changed.  One that I have to change if for no other reason than my own physical health… although wearing a bikini again sounds awfully nice too!

Not only that, but I want to be fit again.  As much hard work as it was, working out gave me so much confidence and made me so proud of my accomplishments. I built habits I had never imagined myself having.  I worked hard and it paid off.  Not only did I learn to run but I participated in 10-km races.  I did workouts at the gym that are seriously cardio-intense and not for the faint of heart.  I regularly let Jillian Michaels kick my butt (her workout DVDs are amazing) and was even getting pretty decent at some of the toughest moves.  I bought a bike and used it.  I love that.  I love that I did all that and I want more than anything to have that back in my life again.

But it’s going to take baby steps.  If I were to try one of those DVDs right now, I’d barely make it through the first five minutes.  I need to start out slow, and build up to where I was before.  That’s the intimidating part – I don’t remember where I started before.  I remember the finish line (and all its rewards and benefits) so much but I don’t remember the starting line.

So I guess it’s time to make a new starting line.  One advantage I do have this time is all the knowledge I gathered along the way last time, and since then.  I know that this time my efforts have to be fuelled by love and positivity rather than by self-loathing.  I know I need to make changes to my diet again starting by tossing the leftover hotdogs in my fridge.  I know that I can’t be afraid of working out.  I have to accept that I am no longer where I was, but that slowly and steadily, I can and will get there again.  Wish me luck! 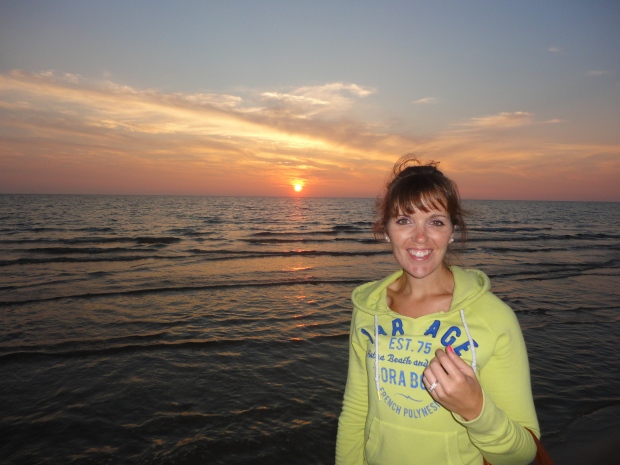