The race was in Ottawa and it was an experience I will never forget.  I had spent months teaching myself to run, had ran a couple of 5ks, had experienced the runner’s high, and had extended my goal to 10k.  I still remember the training day when I ran one straight hour without stopping to walk.  I was nearly in tears.  Me, a forever non-runner, had taught myself to run.  I could run for one hour without stopping.  The feeling was exhilarating.

So on a sunny and humid evening in May of 2010, I joined nearly ten thousand other runners for Ottawa Race Weekend’s 10k marathon.  The run was hard (and I stopped to walk a few times) but the exhilaration of crossing that finish line was something I’ll never forget.  I had done it.  I was a runner.  And even though my time wasn’t really fast, I felt just as credible as every other runner in that race.  Everywhere around the grounds afterward were people sporting their finisher medals but I think I may have been wearing mine most proudly.  My amazing friends and husband (then boyfriend) greeted me with a bouquet of flowers afterwards and then we went out dancing all night as a celebration.  It was incredible. 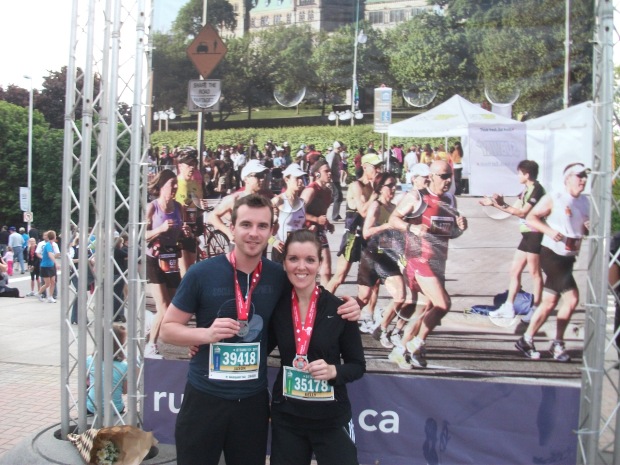 My friend Jason and I after completing my first ever 10k

The following year, I ran the race again.  My time was a couple minutes slower but this time I was thrilled that I had run the entire 10k without walking!  They had also changed the route so that we ran alongside Ottawa’s beautiful Rideau Canal.  It was a cool summer evening and the sun shining over the water was gorgeous.  Thousands of people lined the race route handing out water, cheering us on, and holding up signs with hilarious and encouraging messages.  Again, my boyfriend, friends and I threw a massive celebration afterwards and I went home with another shiny finisher’s medal. 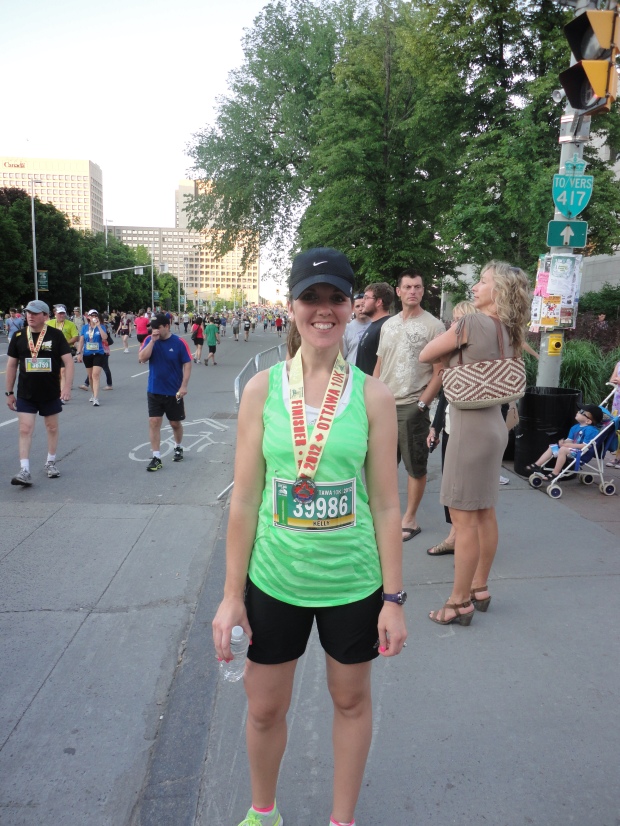 Another time I felt amazing after a race was in 2011 when I ran a 5k race here in my hometown and placed 2nd in my age category. Albeit there were only six women in my category altogether, but the opportunity to stand on the podium and be presented with the “silver” medal felt extremely rewarding!  Another proud moment in my books. 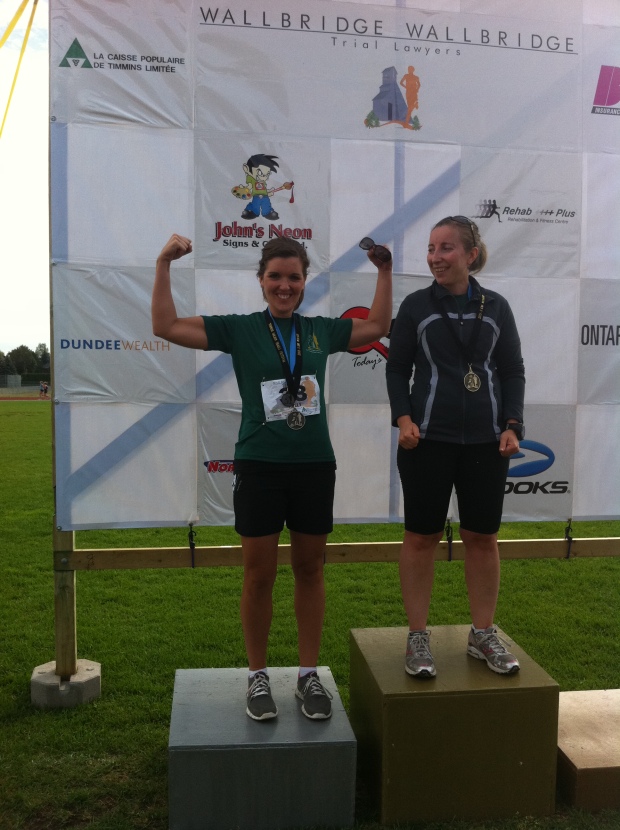 Silver medalist on the podium in 2012

I continued to run into 2012 but was soon hit by an illness that pretty much halted my running altogether.  That year, I was diagnosed with ulcerative colitis and went through a series of tests and medications until I finally found one that worked.  While I’m happy to say I’ve now been in remission from colitis for three years, I never did get back into running.

Today, I laced up my old Nikes, downloaded a new “running” list, plugged my earphones into my ears, and started Day 1 of my new “learn-to-run” program.  It was certainly an easy one (six intervals of run 30 seconds, walk 3 minutes) but just the old feeling of being out there in my running gear, pounding the pavement, felt amazing.  I felt like my old self again.  My old, athletic self.  The self of six years ago who crossed that finish line in Ottawa with soaring levels of confidence, pride, and self-love.

And despite it only being Run 1 of a 13-week program, the old feelings that came back to me today caused my motivation to soar.  In my mind, I’m already registering for races, conquering distances, and meeting personal best times.  I can’t wait!

One thought on “Learning To Run… Again”