Well, it’s officially been one week!   I am so happy with my progress and, more importantly, with how I am feeling.  It’s truly amazing how after just one week of being “on-plan” your whole mindset can change. Just a week ago, I thought the new Weight Watchers Beyond the Scale program was impossible for me.  I thought I’d never be able to eat within my points target.  I believed that I had too far too go and would never get to the so-called “finish line” or my goal weight.  But now, not only have I proved to myself that it is possible to eat within my points, but more importantly, I feel like I can (and will) get to where I want to be.  Before I truly got started, it all seemed so overwhelming (for those of you who don’t know,  in the past I lost 65 lbs and then gained it all back.) For far too long, I beat myself about “failing” and ending up back at square one. I was consumed with how to get back to where I was when I was 65 lbs lighter.  I wanted answers to how and why I failed so I would not let it happen again.  Most importantly, I wanted to be 130 lbs again, now.

But now that I feel like I’ve truly got the ball rolling on healthy habits again, I can honestly say that my mindset is becoming so positive, that I am not focussing so much on the end result.  My primary focus right now is my commitment to myself to follow this plan for 30 days.  I’m taking it day by day until I get there and then will decide what I will do (I’m hoping by then that I’ll have a lot of new healthy habits that will stick).  So yes, I am saying things to myself like “No, I can’t have that” and “That’s not on my plan” but because I know it’s only for 30 days, it doesn’t feel like such a deprivation. If I were saying that to myself about certain foods and the timeline was that I could never eat that again, I’d become overwhelmed and resentful and want to quit.  So all in all, I’m focussing on this 30-day commitment to jump start some healthy habits, to “train” my brain to crave healthier foods, and to develop a positive and confident mindset that will stick around for the long haul.

Breakfast:  I have truly mastered the cooking of fried eggs now!  This morning’s egg was so delicious.  I paired it with my usual 3 slices of turkey bacon.  I really can’t believe how much I don’t miss milk in the morning.  For my entire life, I’ve had a glass of milk with breakfast every day.  Now in an entire week, I think I’ve had one glass of milk. I still crave sugary cereals some mornings but, like the milk, I’ve only had Cheerios once this week!  I consider that a success 🙂 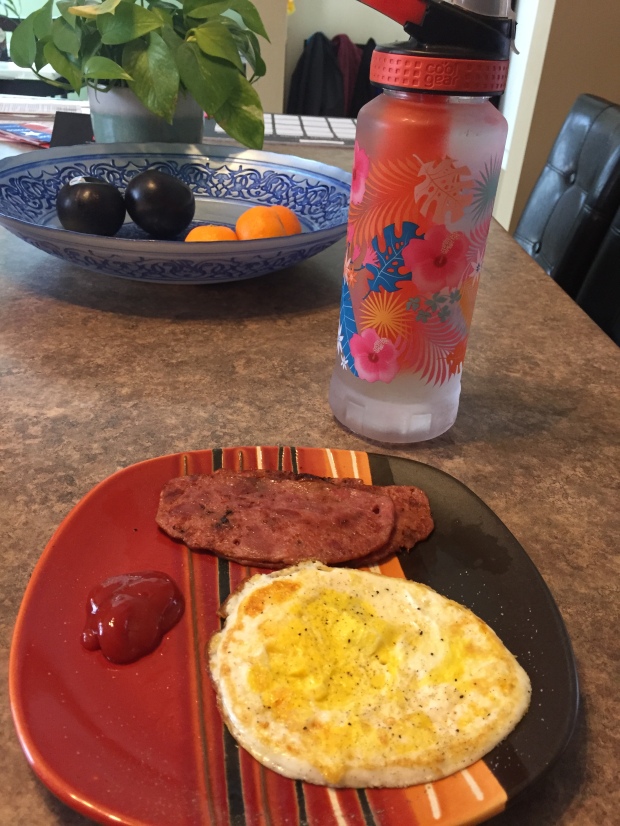 Workout 1: Despite a heat warning, there was a really strong breeze, so I took my fur-baby and we headed out for our usual 2.5 km around the lake.  That breeze certainly helped because the humidity was insane!  I had to stop several times to give Tucker some water.  It’s safe to say I had a decent sweat on by the time we were done.  Eventually once the heat passes a bit, I hope to start doing two laps around the lake for a total of 5km. 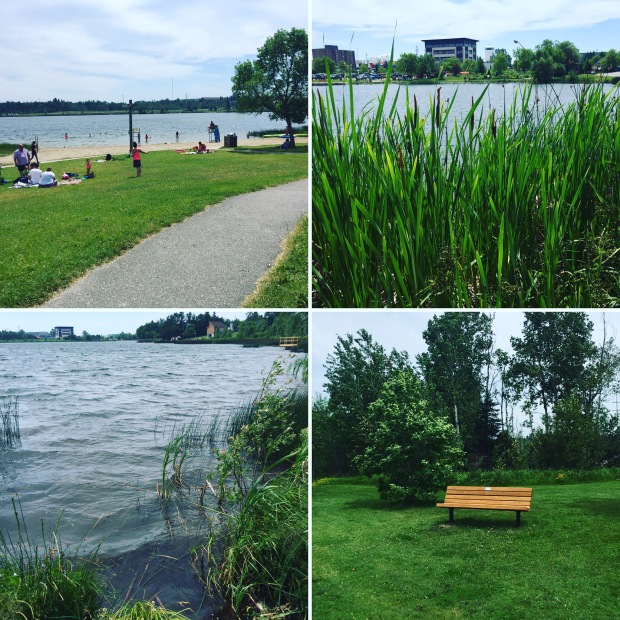 Lunch: I finally decided to try something different for lunch today since I wasn’t really feeling like my typical turkey burger and veggies.  I had some leftover BBQ chicken in the fridge so I sliced some of that up and threw it in a pan with red/green/yellow peppers, a bit of olive oil, and some light taco seasoning.  In a salad bowl, I combined mixed greens, a bit of shredded cheddar cheese, 2 tablespoons of flavoured tortilla strips, and then the chicken and peppers mixture.  I poured a tiny bit of Kraft light Italian dressing on it, and voila!  A pretty yummy chicken taco salad for lunch (for a total of 7 WW points).  I also had a huge piece of watermelon to cool off from the humidity, and of course, drank tons more water. 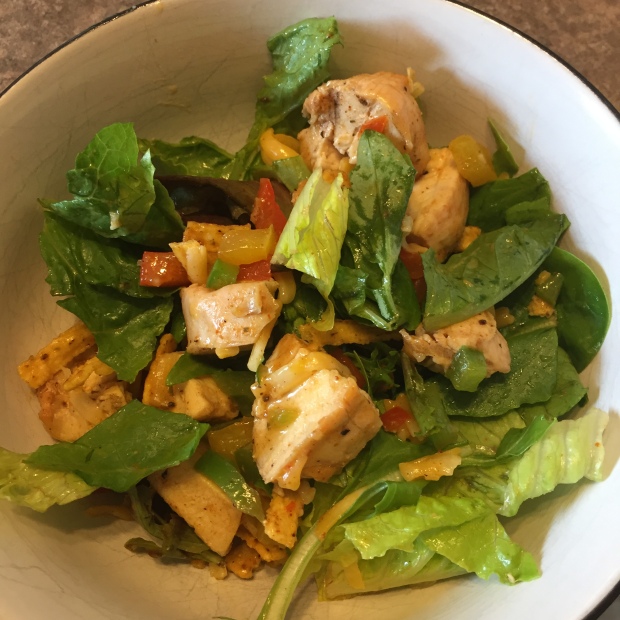 This pizza has been in my fridge for a few days and I’ve managed to avoid it by hiding it behind the spinach! 😂

Workout 2:  I love Tuesdays because there’s an awesome gentle yoga class at my gym that I love.  This class is so peaceful, quiet, and relaxing.  We do a lot of basic yoga poses (downward dog, tree, Warriors), but the flow is really slow, and well, gentle.  Today there was some really calming and beautiful music playing with birds singing in the background that made me feel like I was doing yoga in the rainforest.  Although gentle yoga is not a super strenuous workout, there is definitely some strength training involved, but more importantly, it feels so good on my body and my mind. 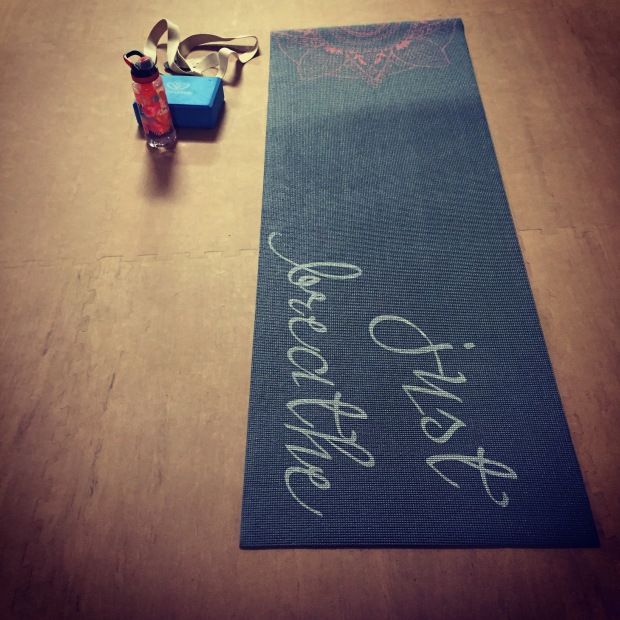 After the gym, I made a quick stop at our local market to pick up some more fresh vegetables and fruits.  This place has the best produce and just being in there makes me want to eat healthy!  I considered picking up something new to try but in the end stuck with my personal favourites: mushrooms, peppers, onions, zucchini, romaine lettuce, baby spinach, mixed greens, and watermelon (I’ve been buying the small ones, they tend to be a lot sweeter!)

Dinner:  I only had to cook for myself tonight so to keep things easy I resorted back to my turkey burger, feta cheese and veggies.  Before making dinner though, I pre-chopped all the veggies so they’d make cooking this week easier and simpler.  Tonight, for a little treat after dinner, I had 1/2 cup chocolate frozen yogurt. 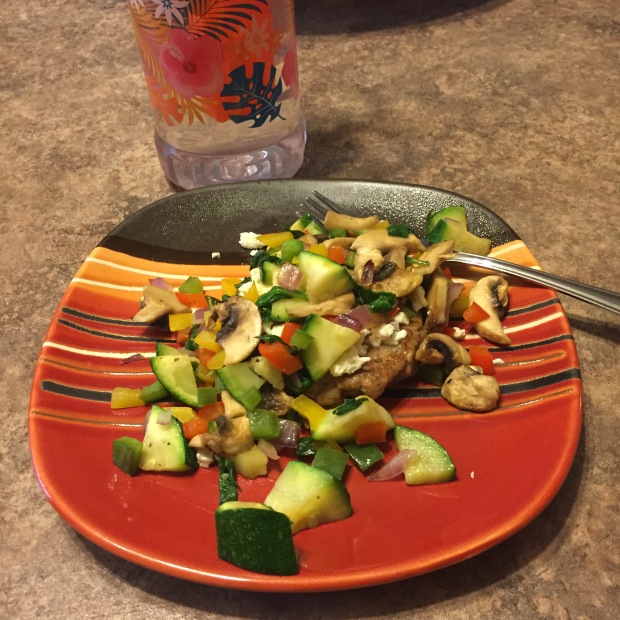 Later on tonight, I decided to head to Wal-mart to pick up a few things (including some grocery items).  Have you ever made the mistake of going to the grocery store while being hungry?  Let me tell you, it is not easy to avoid temptations!  I can’t tell you how many different things I actually had in my hand before I decided to play it safe and put it back!   It was definitely pretty tough but I am proud to say, I only bought what was on my list!  That being said, I did pick up a few “treats” for the camping trip I am going on this weekend.  I am already starting to worry about this trip because for me, camping is always associated with eating junk food (hamburgers, hotdogs, chips, pancakes – you name it!)  I know that the temptation to indulge is going to be huge this weekend so I picked up some Quaker Mini rice cakes (dill pickle flavour) and some BBQ cracker chips.  I am hoping these alternatives will satisfy me while everyone else around me is eating chips!

Snack: When I finally got home, I was able to have a snack.  I still had 7 WW points remaining to meet my daily target and still had 21 bonus points left over for the week (Weight Watchers allots 49 “bonus” points per week for special occasions and for “treat” meals).  Even though Quaker Harvest Crunch is 9 points for only 2/3 cup it is really good in yogurt.  Since I found this Source vanilla yogurt which is only 1 point for 1/3 cup, I decided to treat myself for a total of 1o points!  This put me over my daily points by 3, but as I mentioned I still had “bonus” points left so I can officially say I stayed within all my points now for an entire week!   That’s something worth celebrating! 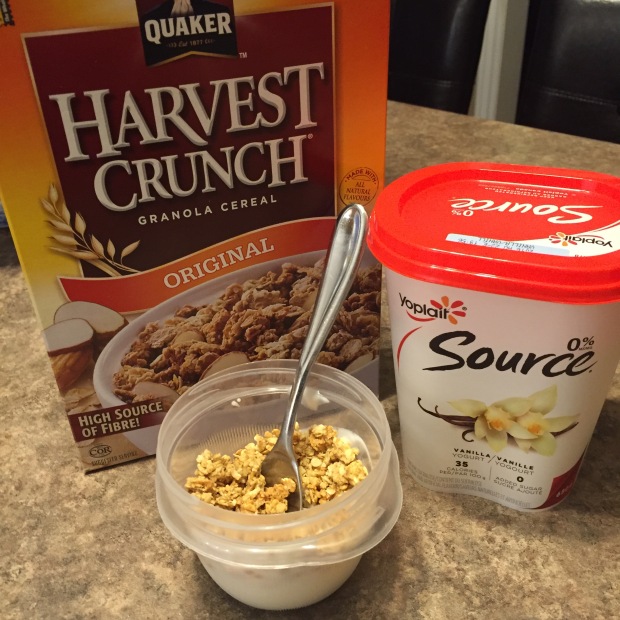 This cereal is high in points so I consider it a “treat”.