Well the first day of the second week of my plan is here and I am not going to lie, it was a bit tough.  I finally woke up a bit earlier than usual (I’ve been sleeping in way too much lately!) and woke up feeling hungry right away.  It was a sign for the rest of the day because I’ve kind of felt hungry all day.  I’ve been very tempted several times to eat something unhealthy and have had to very consciously tell myself no.  The biggest reason I didn’t allow myself to indulge too much today is because I’ve got a camping trip planned for the weekend and I know I will need all of my bonus points to make it through the weekend successfully.  Anyway, all this being said, here’s what today has been like:

Breakfast:  As I already mentioned, I felt hungry as soon as I woke up this morning.  I made my typical fried egg and turkey bacon (3 slices).  I’ve still yet to try anything else for breakfast although I’ve got a recipe for homemade granola and a few other suggestions to try!  I’m also struggling with trying to figure out how to incorporate some healthy carbs into my breakfast (especially seeing as I don’t like most fruits).  In fact, I’m not really sure what constituents healthy carbs at all so that is something I am going to look into.  Suggestions welcome!

Workout 1: Today was another one of my favourite classes at my local gym – power yoga.  This class is similar to the gentle yoga class I do but it’s a little tougher and involves more flow through the movements.  The nice thing about today’s class was that there were only two of us in attendance so the instructor took the opportunity to make corrections on our poses (I really had no idea my shoulders were that hunched in my downward dog!) I left the class feeling strong, as well as deeply relaxed and energized all at the same!

After the lunch, I went to a very fun place – the public library!  I absolutely love strolling through the rows and rows of books searching for titles that catch my attention.  I only made it through half the stacks today and already had four books piled in my arms so I figured that would keep me busy for a while.  Plus, my parking meter was running out and I was pretty hungry, so I checked out my books and left.  As I got into my vehicle, I remembered that Pita Pit was close by.  I suddenly started to crave a pita (I haven’t had one in forever!) I seriously considered grabbing a chicken pita for lunch but decided to quickly use the WW app first, to check the points.  Although I couldn’t find the exact pita on the app, I was able to estimate that the pita would be at least 12 points (or more).  I decided to skip on the pita and headed home to make a healthier (and cheaper!) lunch instead.

Can’t wait to read these!

Lunch:  To keep things simple I decided to repeat yesterday’s chicken taco salad.  The only thing I did different today was I didn’t heat up the chicken and peppers (the chicken was cooked and leftover from dinner the other night).  Yesterday, I found that the warm chicken made my lettuce warm so I opted to keep it cold today.  In case you missed it yesterday, here’s my version of the taco salad:  In a salad bowl, I combined mixed greens, diced red/green/yellow peppers, diced red onions, a tablespoon of shredded cheddar cheese, 2 tablespoons of flavoured tortilla strips, and some diced chicken.  I added a dash of light Italian dressing for flavour and the salad was so yummy that I ate the whole thing today (WW points value = 7).  After lunch, I was still feeling hungry, so I indulged in 1/2 cup chocolate frozen yogurt.

Dinner:  I hadn’t planned dinner tonight but seeing as I still had some leftovers and veggies in the fridge and I was only cooking for myself, I figured I would just throw something together.  But by the time dinner rolled around, I really had to spend some time contemplating what to have.  For some reason, I was really craving carbs tonight – bread, tortillas, pasta – anything.   Seeing as I haven’t had any of those in over a week now I decided it’d be fair game to whip up some pasta as long as I watched my portion.  One of my favourite summer meals is pasta salad so I decided to make one of these.  I cooked some bow tie pasta and then added my peppers, red onions, a bit of feta cheese, and some light Italian dressing (normally, I would have added cucumber too but I didn’t have any on hand).  Seeing as 1 1/4 cup of the pasta came out to 9 points, I figured if I had only 3/4 cup that would equal about 5 points.  I carefully measured out the right portion (with the feta and dressing my portion of salad came in at 7 WW points). Since I wanted to add some protein to my meal, I grilled up a turkey burger and ate it plain on the side.  After, for dessert, I enjoyed a big piece of juicy watermelon. 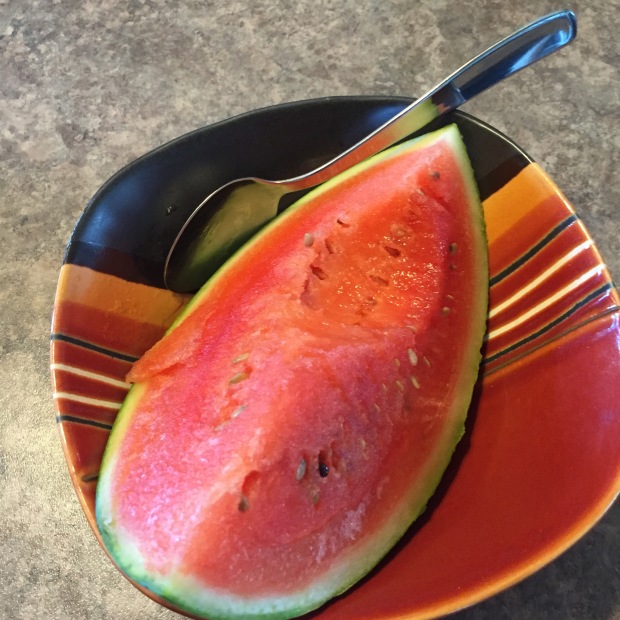 Sadly, this is the only fruit I enjoy. But it’s in season and delicious right now!

Workout 2: We had another softball game tonight.  Sometimes softball can be pretty inactive (if you strike out or if no balls get hit to you) but tonight I had to run the bases a few times (once even all the way from first to third – that may not sound like much but when you’re sprinting as fast you can, it sure gets the heart rate up fast!). So fortunately, our game tonight was a little more of a workout than it sometimes can be.  The best part about playing softball?  It’s always fun to get out, see friends, and socialize.

Snack:  By the time I got home from playing ball, I was getting quite hungry again (even though I had drank a lot of water during the ball game).  After my pasta salad at dinner, I was already at my targeted 30 points for the day.  The whole drive home I pondered about what I could have for a low-points snack that would keep me as close to 30 as possible.  To be honest, when I got home, I really just wanted to rip open the fridge or cupboards and eat just about anything.  I considered crackers and guacamole, whole-grain toast and peanut butter, cereal and milk, and a range of other snacks.  And I’ll admit, while I considered what to have, I mindlessly shoved a few multigrain crackers down my hatch!   Finally I decided to have 1/3 cup of Source vanilla yogurt and some almonds.  Ahhh, almonds.  Here’s where I need to rant for a minute.  Okay, I get that almonds are high in calories and fat.  But they are full of healthy fats, protein, and have no sugar.  Here’s my question than: Why are they so bloody high in WW points?  (1/3 cup = 10 points!)  As I mentioned in a previous post, I believe that every “diet” program has its flaws and I would like to argue that this is one for Weight Watchers (that, and the fact that a diet pop is 0 points, but that’s a rant for another day).  It really frustrates me that almonds are so high in points despite their health benefits.  Then again, unless I was eating mindlessly, I really don’t see myself eating 1/3 cup of almonds in one sitting.  I did some simple math and figured out that I could have about 12 almonds for 3 points.  Not bad at all.  Okay, rant over.  So tonight’s snack was vanilla yogurt with almonds for a total of 5 WW points.

This tasty snack kept me within my points

So now that the day is said and done, I am pretty happy with how it turned out considering I found today pretty tough from the beginning. I am so happy I did not act on a whim and eat mindlessly but instead thought consciously and carefully about my food decisions!  I still think that is so key in my success.  Taking those few minutes to consider options carefully makes all the difference when it comes to eating better.  And although I did finish the day 5 points over my daily target, I don’t really feel guilty because I’ve been earning activity points each day that I haven’t been using (on WW, physical activity earns you points, just like eating uses points.  Some people choose to “eat” their activity points but, until today, I haven’t done so).  Today I earned 11 activity points and only “ate” 5 of them, so altogether I still consider today to be another success!