Today marks the half-way point of my 30-day commitment to myself which is kind of ironic because today was pretty tough.  I don’t know why but all day, all I wanted to do was eat.  And then eat some more.  Here’s some of the challenges I faced today.

Workout 1:  I woke up to go for a walk with Mom at 7 a.m again and today’s walk was no easier than yesterday’s.  My body is just not awake that soon after I get out of bed!  I dragged myself along even though my lower back ached and my legs felt like they weighed a thousand pounds each.  Thank goodness I had Mom to chat with or I likely wouldn’t have completed the entire 5k route.  That, and today was really hot and humid, but at 7 a.m the air was still refreshingly cool and the town is still very quiet as most people are just starting to get moving.   When all was said and done, our walk earned me 6 activity points.

Breakfast:  I enjoyed breakfast on the patio again today.  I cooked up my usual fried egg and turkey bacon (2 slices instead of 3 today) and then because I was feeling more hungry than usual, I also made a slice of toast with butter.  (If you read yesterday’s post you know that toast & butter is practically like having dessert for me!  So yummy!  I savoured every last bit of that single piece of delicious toast!)

After a shower, I took a few minutes to chop some more vegetables and pre-cook some more turkey burgers and turkey bacon.  I find vegetables so much easier to eat if they are prepared ahead of time!   I also hate cooking (and am not a morning person), so by pre-cooking my turkey bacon I can just warm up a couple of slices in the morning. I sipped on my coffee and French-Vanilla cream on the drive to the grocery store.

Speaking of the grocery store…. Have I mentioned today was one of those days where I just wanted to eat everything?  A grocery store is not the place to go when you are having one of those days.  While I watched Mom shop (she needed things, I was just along for the ride), I gazed longingly at the shelves of delicious foods wishing I could eat anything and everything….. Ice cream, pancakes, Eggo waffles, sugary cereals, bagels, chips, chocolate bars, granola bars, cookies, even Toaster Strudels (which I’ve actually never eaten in my life).  I am happy to report, however, that not a single one of those items went into our cart.

Lunch:  On the way home from the store, I dove into a bag of Quaker Mini Rice Cakes to ward off my desire to eat anything.  I tried to keep the portion small but I’ll admit, I was eating pretty mindlessly and kind of just devouring all the rice cakes.  I figure I ate about 8 points worth on the short drive home.  When we arrived home, I prepared my regular turkey burger, feta cheese, and sautéed vegetables and also devoured a large chunk of watermelon and drank a 32-oz bottle of water in one sitting!

Workout 2:  This afternoon, my family and I headed to the local pool.  I used to never be much of one for swimming but recently I’ve discovered that being in the water is actually pretty relaxing so I’ve started to go a little more often.  I like the pool in my hometown on hot days like today because it’s outdoor and it’s the one I grew up going to!  I have many, many fond childhood memories of hot summer days spent at this pool.  Anyway, in an effort to get a bit of a workout, I did actually try to do some swimming as opposed to just walking around in the pool and playing with my stepson.  Overall though, it wasn’t really much of a workout per se, so I’m only counting about 2 activity points. 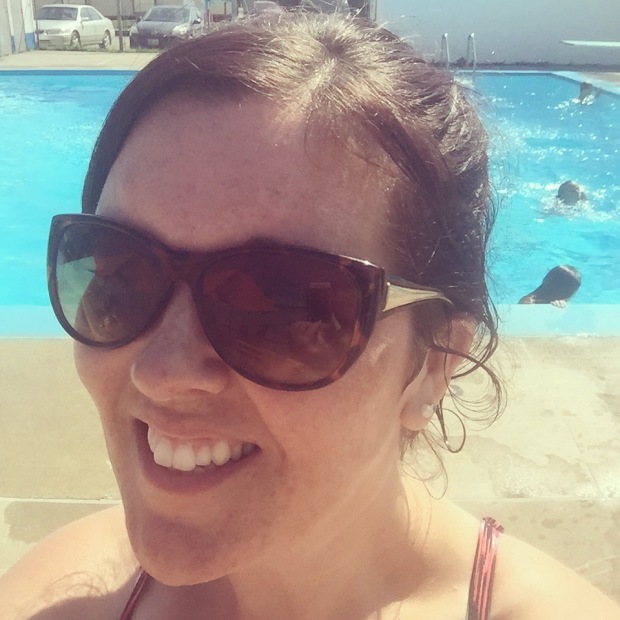 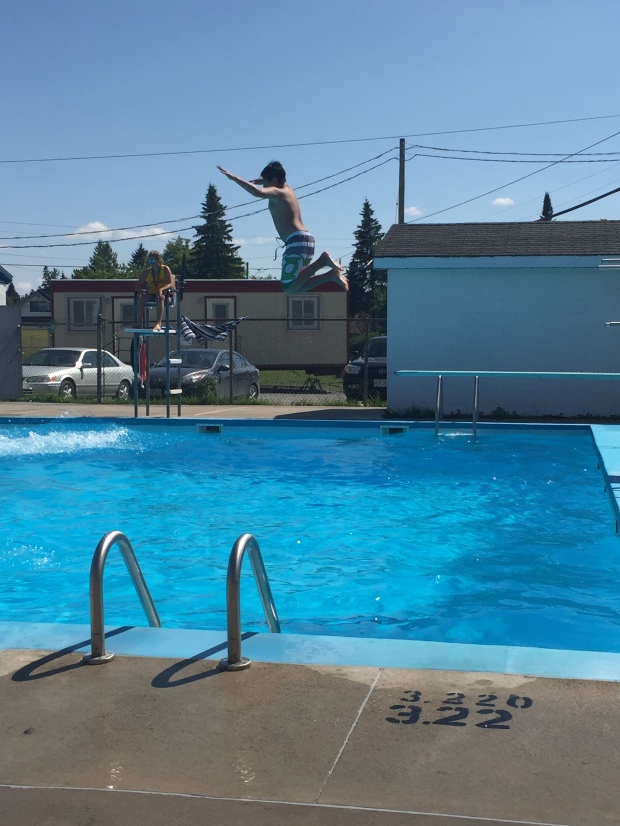 My son leaping off the diving board

Dinner:   By the time we got home from the pool a couple hours later, I was very hungry.  It was still an hour to supper so I drank some more water hoping that would hold me off.  For dinner, my Dad barbecued pork chops (delicious but huge!) and Mom prepared a macaroni salad and a garden salad. Instead of having some of the macaroni salad (prepared with mayo), Mom had set aside some of the pasta for me and I made my own version of pasta salad with a diced veggies, a few cubes of cheddar cheese, and a bit of light Italian dressing.  Although I measured out 3/4 cup intending to only eat some of it, I ended up eating the whole serving since I was still feeling like I wanted to eat everything in the house!

After dinner, I resisted the leftover birthday cake and decided to have a 1/2 cup of chocolate frozen yogurt for dessert instead.  I absolutely love Chapman’s frozen yogurt and would highly recommend it if you’re looking to make an easy transition from ice cream to frozen yogurt.

By 7:30, I was feeling like I needed to eat again.  And once again, I wanted to eat anything.  My husband had brought home this giant jar of peanut butter-filled pretzels and I wanted to devour them.  Instead, I had two and then checked the WW points using my app.  8 points for 17 pretzels.  Considering they’re a pretty good size that’s actually not too bad but I knew if I ate them I still wouldn’t be satisfied and then would have to eat something more.  Instead, I grabbed a small handful of almonds and then some more mini rice cakes and a Diet Coke.

So I am definitely over my points allotment today but as previously mentioned I am not sure what’s up today but I just want to eat ALL. THE. FOOD.   I don’t know if I didn’t drink enough water, if it’s a specific time of the month, or if it was just “one of those days” but I certainly hope this feeling has gone away by tomorrow!   I do have to give myself some credit though because I did better than I could have today.  For instance, I passed on going to the chip hut for lunch with my cousin who is visiting, and I avoided Mom’s freezer that has all kinds of ice cream including Drumsticks, and her snack cupboard which has several bags of chips!  Still, today overall was a bit disappointing in general (especially considering I’ve had a couple high-points days recently) so I am hoping to do better tomorrow!